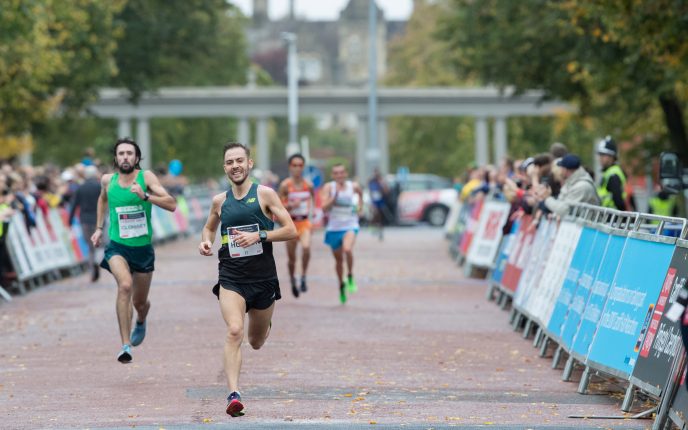 Hulson from Mold in North Wales was the winner of the Saucony English Cross Country Championships at Parliament Hill in 2015 and took the Armagh International Road Race title in 2016. He made his debut for half marathon a year later, finishing in 65:33 in Cardiff. He will now look to revise his 65:19 best set at the Copenhagen Half Marathon earlier this month.

Mohamud Aadan (62:38) is the fastest British Athlete on paper and will now look to move up the British all-time lists as he attempts to run under 61 minutes. Aadan was seventh at the Commonwealth Half Marathon Championships held at the race last year.

Welshmen James Hunt (68:58) and Abed Teweldebrhan (debut) have run 29:58 and 29:26 for 10km respectively with Hunt now likely to considerably improve his half marathon best and Teweldebrhan hoping to make a strong debut.

Louise Damen (70:47) is the 15th fastest British athlete of all time and will race in Cardiff hoping to move towards the kind of form that saw her take Inter-Counties and English National Cross Country titles in 2013.

Much like Davis, Rebecca Robinson (72:38) is an elite athlete who also manages a career as a doctor. Robinson set her P.B. at Cardiff in 2014 finishing fifth and returning a year later to finish seventh in 74:02.

Stephanie Davies (74:04) shot to notoriety in April when finishing as the first athlete outside of the Elite field at the Virgin London Marathon in 2:32.38. She currently sits second in the 2019 Scottish lists for half marathon.

Calli Thackery (75:33) of Hallamshire harriers and Rebecca Hilland (75:38) of Team Bath will also race in the Welsh Capital.

Alaw Beynon-Thomas (76:38) and Sophie Harris (debut) are among the top Welsh athletes entered. Harris has great 10k form with a 34:35 clocking to her name. Twice ITU World Triathlon Champion Helen Jenkins will also be in action.

The top British athletes will line up alongside some global names, announced by the race last week.

Most notable is former IAAF World Cross Country Champion Japhet Korir (60:08) who was the youngest ever senior Champion when he took the global title in Bydgozsz in 2013. Korir was fourth at the Hague Half Marathon in 2018 and a winner at the Great Ireland Run in 2014 and 2015.

Wilson Chebet (59:15) is the fastest athlete on paper. The 2011 Rotterdam Marathon Champion, set the course record at the Amsterdam Marathon in 2013, and finished second in Boston in 2014.

Leonard Langat (59:18) ran his PB when finishing second at Roma Ostia in 2016 and more recently took the 2017 Barcelona Half Marathon title and recorded a time of 59:41 for second at the Hague last year.

Shadrack Kimining (59:42) was the winner in Cardiff back in 2016 and recorded his lifetime best at the Ras Al Kaimah Half Marathon in February. John Lotiang (60:08) is another former Cardiff winner, taking his title in 2017.

Interrnational athletes in the women’s race include Paskalia Kipkoech (67:17) who was seventh at the IAAF World Championships here in 2016 and was the bronze medallist at the Championships in 2012.