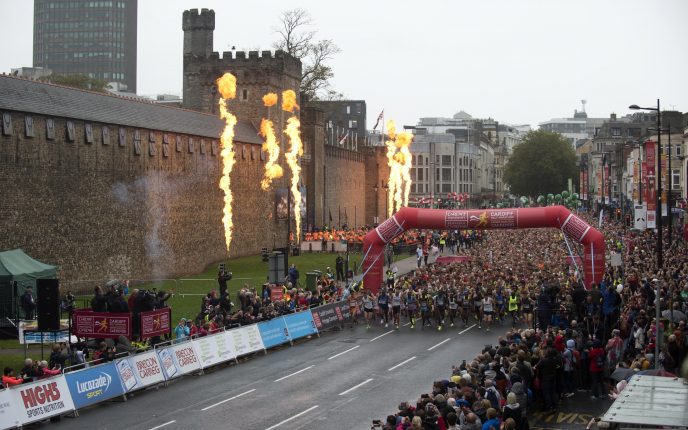 What a race, what a day, but who was the biggest hero? You couldn’t pick the best performance of the day in the Cardiff University/Cardiff Half Marathon because there were so many candidates.

Any one of the 19,641 starters could have put their hand up for the prize, but you had to take your hat off to the following:

And this little lot for entering the Guinness Book of Records for their remarkable performances:

It was a remarkable all round effort that once again showed-off the wonders of the Welsh capital to the world via a near three hour live broadcast on BBC 1 Wales. On the same day that Glasgow hosted the Great Scottish Run, Cardiff came out on top by a mile in terms of numbers, times and atmosphere.

“Every year the Cardiff Half Marathon gets bigger and better and the 2017 edition was no different. We had world records, a UK All Comers Record, some outstanding personal bests at the front end and some remarkable feats further down the field,” said Run4Wales chairman, Nigel Roberts.

“Congratulations to Gareth Thomas and ‘Alfie’s Army’ for providing such an inspirational back story to the race, and well done to the 19 strong teams from Cardiff’s French twin city, Nantes, who made the trip under the leadership of Thierry Delmiel for making the trip across the Channel.

“The Cardiff Half Marathon has become a truly international race with a world class field at the front end of the men’s and women’s races and a joy to behold and take part in behind. We put it on for the people, and it is the people (19,641 of them this year) that make it the roaring success it has become.

“So a big, big ‘Thank You’ to each and every one of you who took part, to those who came out to support and to everyone who helped to make the event happen. There is a small army of people who work under our Race Director Steve Brace and their tireless professionalism ensured everything ran smoothly.

“Cardiff University, as our title sponsor, also play a huge part in the delivery, as do other key partners such as Cardiff Council, Vale of Glamorgan Council, Brecon Carreg, Aldi, Barnardo’s Cymru, BBC Wales and Recycle for Wales.

“The Emergency Services are the bedrock of the organisation, along with St John’s Ambulance, and they all combine to help deliver what Cardiff does best – put on world class events!

“The Cardiff University / Cardiff Half Marathon will be back in 2018 and it will take something to top this year’s race . . . but we will! I can say that in all confidence because I know the people of Cardiff, Wales and from many other parts of the running world will help us to do that.

“Thank you for running – see you all next year.”

Entries for next year’s event on Sunday, 7 October, 2018, will open tomorrow. The 2017 race sold out in record time, so demand is expected to be high! Act fast – the first 5,000 runners to sign up will receive discounted early bird entry. You can pre-register here and be notified as soon as entries go on sale!