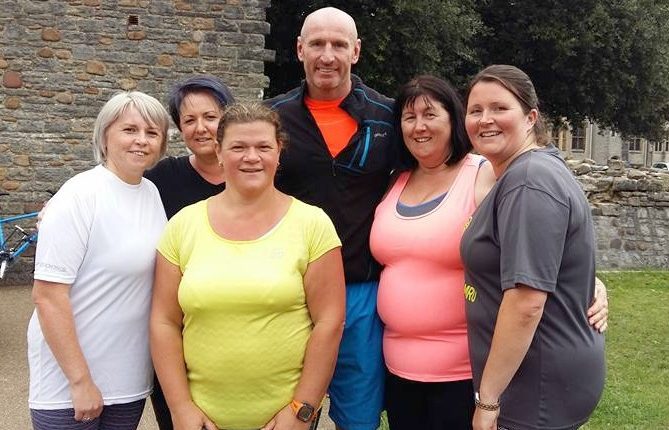 Sandra, a lecturer in adult nursing at the School of Healthcare Sciences, is one of Alfie’s Angels, a group of 100 novice runners being put through their paces by the former rugby hero.

Alfie has held several training events with the runners – including a pep talk and run at the University’s Talybont Sports Training Village – ahead of the Sunday 2 October race.

The Angels’ efforts will feature in a BBC Wales TV programme on 16 September.

Sandra, 52, who ran the London Marathon 25 years ago but has not run since, said Alfie was an inspirational motivator.

“We had a boot camp and, because I had a bad foot, I started running slowly. Alfie was walking with us at the back and he was very interested in us,” said Sandra.

“He was saying ‘it isn’t a race, it’s about changing your life’.”

Sandra, a former Cardiff University student who is also currently studying a Master’s Degree in Advanced Practice in nursing at the University, can relate to Alfie’s call for change because she made a firm decision to ditch a sedentary life for an active one.

The University’s support of the Cardiff Half Marathon, combined with Sandra being chosen for Alfie’s Angels alongside her team of four friends the Rhondda Rollers from the village of Llanharry in Rhondda Cynon Taf, was all the encouragement she needed.

“It’s easy to get into a rut of not doing any exercise, especially when you’re working full time. When you get home you just want to put your feet up,” she said.

“It’s too easy just to give up and not do anything. I don’t want to be like that.

“The motivating factor for us all was to live our lives and not sit there watching our children, but to be actively involved with our children’s lives and games.

“I even ran in the mums’ race in school and I’ve never done that before!”

The University is title sponsor of the race following its successful partnership with the IAAF/Cardiff University World Half Marathon in March this year.

Training has not been easy for Sandra because she has struggled with injury and had to balance her running with a busy life.

But despite a few ups and downs she is already reaping the benefits of her new active lifestyle.

“I feel much more energised, more enthusiastic about getting up and getting on with things,” said Sandra.

“Surprisingly I enjoy going out and running, doing something. I do feel it’s improved my mindset.”

Alfie’s successful training of 16 non-runners to complete the Cardiff Half in 2015 featured in a popular BBC Wales TV programme which is returning to highlight his current crop of novice runners.

Gareth Thomas: Alfie’s Angels is a four-part series the first of which will be shown on BBC One Wales on Friday 16 September at 19:30. The last episode is aired on 7 October to find out who makes it over the finish line.