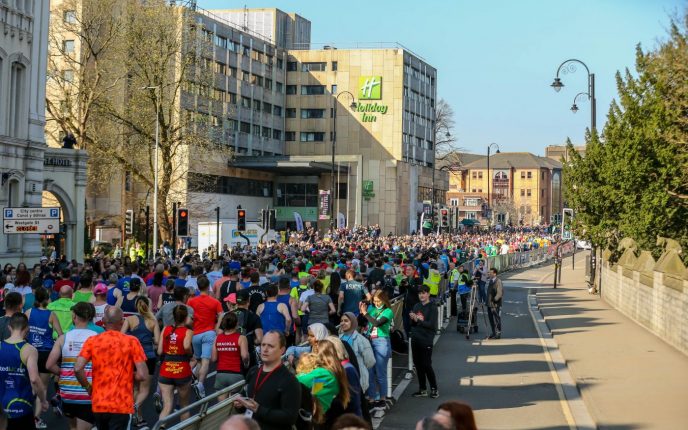 The 2022 Wizz Air Cardiff Half Marathon, which will return to the Welsh capital on Sunday 2 October, has officially sold out for the fifth time – just three and a half months after going on sale.

The few remaining general entries were snapped up in the early hours of this morning, as it was revealed that the race is on track to generate its £20 millionth pound in fundraising at the 19th edition of the event this year.

Demand has been high with many keen to return to mass participation events for the first time since the pandemic or looking to challenge themselves to complete one of the Europe’s most iconic distance events after taking up running during lockdown.

With general entries now sold out, the only route to securing a space on the start line this year is by signing up to run for one of the race’s official charities, including Lead Charity Partner NSPCC and Associate Charity Partners Alzheimer’s Society, British Heart Foundation, Mind, Shelter Cymru and Prostate Cancer UK.

Fundraising is at the heart of Wales’ largest mass participation event, which has associations with over 90 charities – and organisers are urging the Welsh public to get behind the event and join the race to reach the £20 million pound fundraising mark this October.

Run 4 Wales Chief Executive, Matt Newman commented: “We’re delighted that so many people have set their sights on the Wizz Air Cardiff Half Marathon in 2022, and that the race will return to its traditional autumn date this October for the first time in three years.”

“We’re also excited to reveal that in its 19th year, the race is on track to generate its £20 millionth pound in fundraising. Although general entries have sold out, it’s still possible to get involved by securing a space via one of our amazing official charities, so we’re urging those keen to take on Wales’ iconic road race this autumn to join and help us reach this incredible milestone.”

The race, which has been elevated on the world stage because of its new partnership with Wizz Air and inclusion in the new launched SuperHalfs Series, will also welcome a record number of runners from overseas and outside Wales this year.

The SuperHalfs Series is offering running enthusiasts the unique opportunity to embark on their own running adventure and earn a SuperMedal for completing a five-race circuit. It includes races in Lisbon, Prague, Copenhagen, Cardiff and Valencia.

The Cardiff Half has a new-look, brand and headline sponsor in Wizz Air, with exciting new experiences and innovations planned as a result, but the flat, fast and iconic route around the Welsh capital remains unchanged – taking in all of the city’s most iconic landmarks, historic buildings and beautiful scenery.

Marion Geoffroy, Managing Director of Wizz Air UK, commented: “As the proud title sponsor of the Wizz Air Cardiff Half Marathon, it’s fantastic to see the excitement building as the race sells out and we get closer to hitting £20 million in fundraising. We have always promoted an active lifestyle, and this partnership is an embodiment of that commitment. With a focus on innovation and creating new experiences, the 2022 half marathon will be bigger and better than ever. We’re looking forward to welcoming a record number of runners from around the world, who will also have the opportunity to enjoy everything Cardiff has to offer.”

You can join the race to hit the £20 million fundraising mark today by signing up to run for one of the race’s official charities.

Event organisers Run 4 Wales (R4W) will be showcasing a number of these good causes in the coming days, sharing more details on the race to £20 million this October as well as several human-interest stories from inspiring past and current fundraisers, as well as people and communities who have benefited from money raised at the race since its inception in 2003.

A list of charities with spaces remaining in the 2022 race can be viewed below. There are also a limited number of entries available via series and charity packages at www.superhalfs.com for runners interested in completing the five-race circuit.