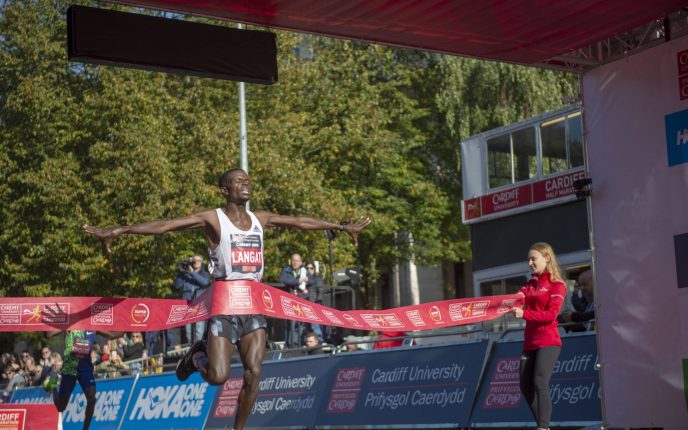 Leonard Langat helped the Cardiff University / Cardiff Half Marathon celebrate its recent inclusion in the new European ‘Super Halfs Series’ by taking 73 seconds off the course record in the Welsh capital.

Langat came up with a brilliant sprint finish to pip fellow Kenyan, and 2016 champion, Shadrack Kimming by a mere two seconds. Langat won the race in 59 min, 30 sec, a mere 12 seconds outside his previous best, while long-time race leader Kimming at least had a 10 sec PB to reward his efforts in second place in 59:32.

Those two times would have earned them the silver and bronze medals at the 2016 World Championships staged over virtually the same course in Cardiff, when current world record holder Geoffrey Kamworor won the title in 59:10 with Mo Farah back in third place in 59:59.

“I was feeling comfortable behind Shadrack and I pushed on in the final 500 metres. I kept the pace up right to the finish because I was feeling so strong,” he said.

“I always feel strong when I am running happy and that is down to the fantastic training group I have in Kenya. This is a wonderful course and I am sure that someone could run faster than 58 minutes on it in the future.”

Kamworor cut the world record down to 58:01 in winning the Copenhagen Half-Marathon, another one of the ‘Super Halfs Series’ events, last month.

Kimming tried to push up the steep incline coming off Roath Park Lake up to Cathays Cemetery, where Kamworor broke the field in 2016, but Langat refused to be shrugged off. He stayed on the shoulder of his rival before making his move coming down the finishing straight.

“I am happy to have run a PB and I think this is one of the fastest courses on which I have ever run. It is a bit like the event in Ras Al Khaimer,” said Kimming.

The first British athlete home was Mohamud Aadan in 11th place in 64:15. Peter Le’Grice was one place further back in 64:21, a 35 sec PB, while Charlie Hulson took the Welsh title dominated by Dewi Griffiths in recent years with a PB time of 64:28 – a 51 sec improvement on his previous best in Copenhagen last month.

Hulson, a former English cross-country champion, is preparing for his marathon debut in Valencia on 1 December and was delighted with his run in Cardiff, which featured a record 20,432 starters from a 27,500 entry.

“I’m still relatively young for the marathon,” said the 26-year-old, “but I enjoy the longer work and there is no point in waiting around to have a go at it.

“I felt fairly comfortable at the pace at which I was running, but I won’t be going off that quick on my marathon debut. Anything under 2:13.00 I will be happy with and the long term goal is to make the Welsh team for the Birmingham Commonwealth Games in 2022.”

There was another dramatic finish in the women’s race as Kenya’s Lucy Cheruiyot and Ethiopia’s Azmera Abreha ran side-by-side down the finishing straight, with another Kenyan, Paskalia Kipkoech, not far behind.

In the end, the extra strength of Cheruiyot carried her to victory, although both she and Abreha were given the same times, 68:20. Kipkoech was a further five seconds behind in 68:25.

In the elite men’s wheelchair race, Danny Sidbury won comfortably despite having to pull over to find some tools to tighten one of his wheels after it threatened to fall off. Such mechanical difficulties are nothing new to the T54 Class athlete, who suffered a blow out on the start line of the Vitality Big Half Marathon in London earlier in the year.