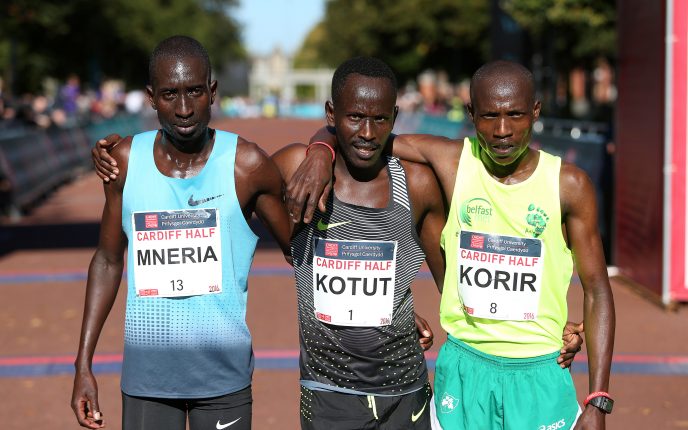 A stellar field of athletes from across the globe will battle it out on the streets of the Welsh capital at the Cardiff University/Cardiff Half Marathon on October 1st.

Kenyan stars Shadrack Kimining and Violah Jepchumba will defend their Cardiff Half crowns after they sent race records tumbling 12 months ago. But both face serious competition if they want to defend their titles at this year’s event, which was recently awarded the coveted IAAF Silver Road Race label for 2017.

Kimining’s biggest threat comes in the shape of countryman Wilfred Murgor, who is the only athlete at this year’s race to have dipped under the hour mark (59:57).

Swansea Harrier Griffiths is fresh from setting his latest big personal best time of 62:53 in finishing seventh in the Great North Run. And the 26-year-old  is looking to reduce his time even further against what is shaping up to be one of the hottest fields ever assembled outside the 2016 IAAF World Half Marathon.

“My position was probably better than the time in Newcastle. I had a great month in August and I wanted to take a chunk off my half-marathon this weekend – perhaps a little more than I did,” admitted Griffiths.

“I won’t change my racing or training schedule and we’ll see what happens in Cardiff next month. If I can test myself off the back of some good training and great times next month then that will give me an idea of what I’m capable of.”

Kimining has slashed 42 seconds off his record breaking time of 1:00:53 since last year’s race and will be aiming to go under an hour for the first time on the flat, fast course. Murgor has previously achieved that accolade, boasting a 59:57 time at the 2015 Sportismo Prague Half Marathon.

Violah Jepchumba (1:05:22) will compete in Cardiff two weeks after lowering the Bahraini Half Marathon Record to 1:06:06 whilst winning the Usti Nad Labem Half Marathon. She remains the fifth fastest athlete of all time over the Half Marathon distance and the second fastest over 10km. She also starts the race as the defending champion.

Kenyan duo Dorcas Kimeli and Caroline Nyaga will both debut over the distance in Cardiff.  Ethiopia’s Zeineba Yimer (1:13:17) was 10th at the IAAF World Junior Cross Country Championships in March and is hoping to run faster than her previous best on the 1st of October.