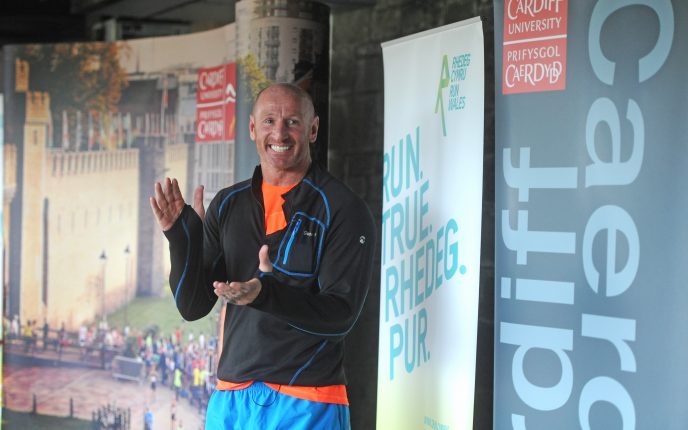 Gareth ‘Alfie’ Thomas is recruiting for an Army of 100 runners!

Alfie is back. But this time he is looking to get young people off the sofa and into their running shoes to take on the Cardiff University/Cardiff Half Marathon.

Wales rugby legend Gareth Thomas has helped his band of ‘Alfie’s Angels’ go from novice runners to half marathon finishers over the last two years. But this time around he is inviting 100 young men and women aged 17-21 to join ‘Alfie’s Army’ for a challenge of a lifetime on October 1st.

Thomas, alongside international running coach James Thie, wants to help the young people of Wales kickstart a healthier lifestyle by going from the sofa to 21km in four months. We are looking for teams of five or more young people who have never never taken part in any running event over 5km in length to enter in this year’s series.

Two of the teams will be filmed being put through their paces for the BBC1 Wales TV Alfie’s Army series. The other successful entrants will not only be given free places in the race, but will also have the chance to meet the man himself at the launch event, 10K training race, eve-of-the Half Marathon get together and on the day itself.

If that wasn’t enough, teams will be given a step-by-step 16-week training plan developed by Alfie and James Thie and will feature on the live BBC1 Wales race coverage on the day.  Each week runners will receive a detailed training plan and nutrition guidance to get them in tip-top condition, and video messages from Alfie and James will help spur you on during the four month plan.

Alfie said: “We’re having a rebrand! We’re returning, but this time we’re looking for 100 young people to join this year’s gang, called ‘Alfie’s Army’. Over the last two year’s we’ve seen women kickstart their healthy lifestyles and achieve things they never thought possible. This time we want to get young men involved as well, so if you’re up for the challenge of a lifetime, sign up now.

If you are interested in taking part in the TV series, email [email protected] with a short video of yourself and your team mates explaining a bit about yourselves and why you’d like to take part before midnight Friday 12th May. The BBC are searching for applicants aged 17-21.

If you don’t fancy featuring in the BBC1 series (or want to give yourself a better chance of being selected to join the 100 Club), you can also sign up to be a part of this year’s Alfie’s Army via Run 4 Wales through our online application form below. Run 4 Wales applicants must be over 18 and apply before the May 22nd deadline.

The training programme is fully tried and tested, and in the past 3 years over 200 novice runners of all ages and abilities have successfully completed the Cardiff University Cardiff Half Marathon by following it. Our youngest runner was 17, our oldest 63. It is a step-by-step programme. If you follow it closely, you will definitely go from couch potato to 21 kilometres in under four months.

The 2016 race sold out in just six months and attracted a record 22,000 runners, but interest in the 2017 race has been higher than ever – with organisers expecting 24,000 runners at the iconic Cardiff Castle start line on Sunday 1st October. Sign up at www.cardiffhalfmarathon.co.uk/register/ to make sure you don’t miss out on what promises to be another day to remember in the Welsh capital.